Do you love photography but have never shot with 35mm film? Now is the best time to try our list of the 8 best film cameras on the market.

The vast majority of photographers now shoot digital, barely giving the film a second thought. But are we missing out by ignoring yesterday’s technology?

Perhaps you’re a digital native, or, like me, you shot a film in your youth, but switched to digital with enthusiasm as the technology developed?

Whether you wish to try it for the first time, or you’d like a trip down memory lane, there is bound to be something for you in our list of the world’s best film cameras available now. 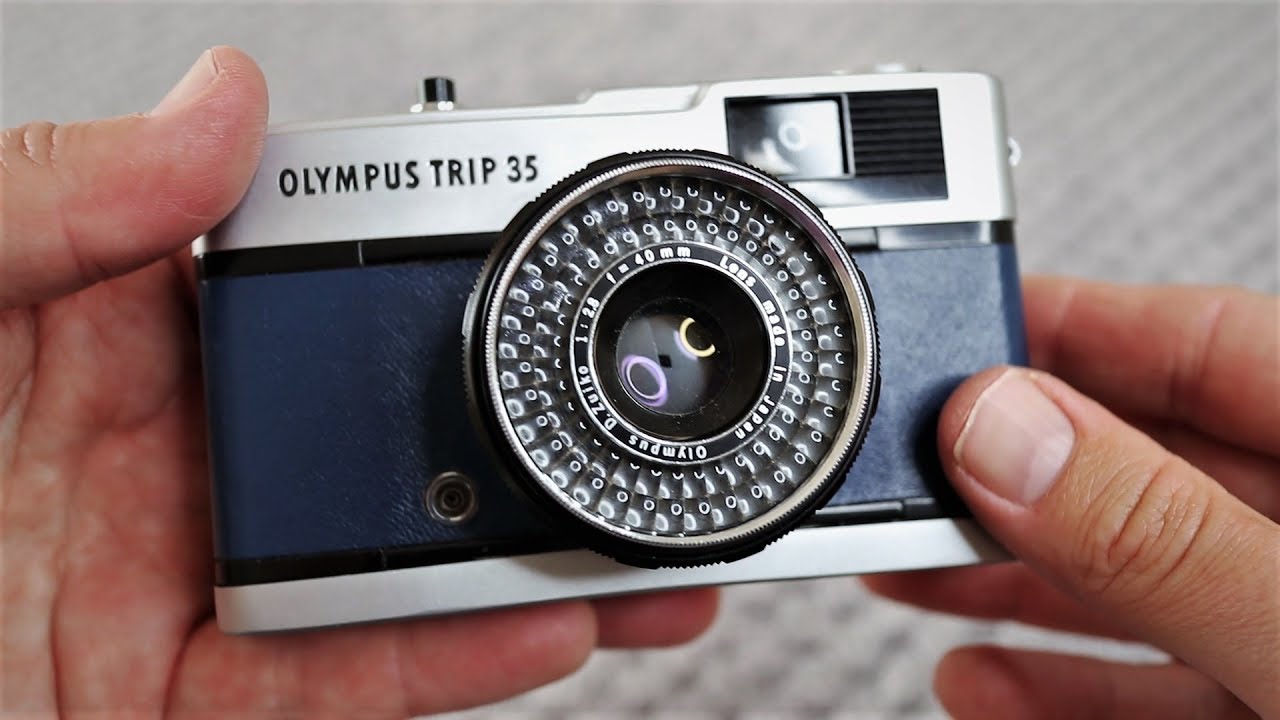 Made between 1967 and 1984, the Olympus Trip 35 is rightly recognized as a classic of the film era. The Trip was marketed as a camera you’d take on the holiday–easy to use and portable.

Amazingly, it doesn’t need a battery: it’s solar-powered–thanks to a selenium cell around the front lens element. The Trip has just two shutter speeds (1/40 and 1/200), and a red flag springs up in the viewfinder to stop you from taking underexposed pictures if light levels are too low.

Focusing is a zone-based affair: simply pick from one of four pictograms on the lens barrel to choose the focus distance. The 40mm f2.8 lens is sharp and the simple settings leave you free to get creative with your compositions.

While there are countless Trips out there in charity shops and car boot sales, you can also buy refurbished examples, with replacement leatherette available in all colors. I love my Trip and use it regularly–there’s something so refreshing about its simplicity. It really is one of the best film cameras out there–sometimes less really is more!

The Electro 35 is a rangefinder camera with an absolute gem of a lens–it’s super sharp and very fast, with an f1.7 maximum aperture. The most desirable model is undoubtedly the Electro 35 GSN, which is easily spotted thanks to the addition of a hot-shoe.

With an all-metal body, the Electro is built to last and its near-silent leaf shutter allows you to shoot unobtrusively. If your battery dies, it will even shoot without a battery, defaulting to a 1/500 second shutter speed. Pair this with ISO 400 film and a sunny day, and it’s a recipe for one of the best film cameras available.

This cult classic has even seen action on the big screen in Hollywood: it was featured film The Amazing Spider-Man (2012). The character Peter Parker uses one in the first half of the film.

If you’re looking for something a little cheaper than the Olympus or Yashica, but equally as capable, take a look at the Ricoh 500G. This is one of my favorites and one of the best film cameras.

Launched in 1972, it was also sold as the Sears 35RF in some markets. It sports a slightly slower lens than the Yashica Electro, but that lens is very sharp and it has an all-metal body. The 500G is also noticeably smaller and lighter than the Yashica, so if portability is important, this could be the camera for you.

The Ricoh uses Shutter priority or Manual mode and the meter registers in the viewfinder, even in manual mode. The battery only powers the meter, so you can shoot without one if you’re prepared to calculate exposures yourself. The 500G was the first camera I bought when I got back into film, and I still use it regularly.

Not many cameras can claim to be genuinely groundbreaking, but the Olympus XA really can!

The clamshell design by former automobile engineer Yoshihisa Maitani looked positively space-age when it was launched in 1979. He is a legend in the world of camera design.

Its ultra-compact and light design hides a true rangefinder and a tiny but sharp f2.8 lens. Winding the film is done via a thumbwheel, like the Trip 35, saving space and weight. It can often be bought with the original A11 flash unit.

The shutter has a feather-light electromagnetic design, offering sensitivity and limiting camera shake. The only downside of this pocket rocket is that it won’t work without a battery.

The XA was succeeded by four further camera models–the XA1 to the XA4– which were all aimed at slightly different markets. The original design is arguably the best and in recent years prices have risen to reflect this.

Often described as the poor man’s Leica, the Canonet QL17, launched in 1969, is rightly considered a classic of the rangefinder genre. Indeed, it was Canon’s best-selling camera for more than 11 years.

Like most rangefinders, it has a leaf shutter, which is all but silent–great for discreet shooting. It also has a very short focus action, allowing you to zip between distance and close focus with very little effort: useful for rapid focusing in genres such as street photography. It’s a good choice for those who are new to manual exposure, with handy sunny and cloudy markings on the lens barrel.

If you want to save cash, it’s also worth seeking out the Canonet QL19 or QL28, which sell for significantly less than the QL17. They have slower lenses (f1.9 and f2.8 respectively) but are very similar in other areas. The QL stands for ‘Quick Loading’. This is a reference to the simplicity of loading the film, compared to the fiddly Leicas of the period.

Another groundbreaking design by Maitani, the OM-1 is so iconic that its form is echoed in today’s Olympus OM-D mirrorless cameras.

Maitani was a perfectionist when it came to streamlining his designs, and the finished OM-1 was a mere 1mm larger than his original blueprint.

Compact and light, it boasts a large, bright viewfinder for easy focusing, and can be used without a battery in manual exposure mode.

There is also a wide range of excellent OM Zuiko lenses available at reasonable prices, which makes it one of the more flexible best film cameras available.

If you like the idea of a camera with interchangeable lenses, but you aren’t confident with manual exposure, the Canon AE-1 Program could be the one for you.

Launched in 1981, over a million of these groundbreaking cameras were sold. Not only does it have program mode, which offers auto exposure, but it also has the same excellent viewfinder as the professional Canon F1.

Blessed with a comfy handgrip, the AE-1 Program handles well and is light thanks to its chrome-coated plastic body. There’s a plentiful supply of Canon FD lenses available at all focal lengths, from wide-angle to an eye-watering 1200mm!

However, unlike other models, the AE-1 Program doesn’t work without a battery, so it would be sensible to keep a spare in your camera bag.

The Pentax K1000 is something of a legend and is still used in college photography classes around the world.

Over 3 million were sold between 1976 and 1997, so there’s no shortage of secondhand models available for purchase.

A purely manual camera (you set the aperture, shutter, and focus), its simplicity is one of its strengths and the all-metal construction means it’ll stand up to knocks.

The viewfinder has a micro prism to aid focusing and an orange/black indicator by the shutter button to show when you’ve found it. There’s an astonishing range of K mount lenses, from Pentax and other manufacturers, to choose from, although I’d advise starting with a 50mm prime lens.

How to Choose the Best Film Camera

All the cameras I’ve recommended here use 35mm film. Such film is still widely available and inexpensive.

You may decide later on to try a larger film format–such as 120mm–but 35mm is the best place to start if you’ve never shot on film before.

Don’t forget to be frugal with your shots: you’ll only have 24 or 36 frames to get it right–there’s no LCD screen to see what you’ve taken, or the option to delete a shot if you don’t like it.

Another important question is, should you use black and white or color film? Why not try both? Color film is cheap and widely available, and there are still high street and online vendors who will process them.

Black and white have an authentic, retro feel and are easy to purchase in many different varieties. You may struggle to find high street processors but there are plenty of online options including Harman Lab. Of course, if you have the equipment and know-how, home development is a cheaper option.

Remember, if you currently use a digital camera with a crop sensor, you’ll get a full-frame with whichever 35mm camera you choose.

Which Type of Film Camera to Buy?

This depends on two things: how big/heavy you want the camera to be, and how much manual control you’d like:

If this is your first film camera, make sure you purchase from a reputable source. Always buy a model that’s been cleaned and serviced.

You can often pick up old cameras from charity shops for next to nothing, but there’s always a risk they won’t work.

There are shops on eBay and Etsy which sell refurbished cameras and lenses, but do a quick web search and you’ll find actual bricks and mortar shops in your region. Yes, you’ll pay a bit more, but you will have some reassurance the camera will work straight out of the box.

Some of these cameras will work without a battery if you’re prepared to calculate the exposure settings.

One way to do this is to download an app to your smartphone–I use Pocket Light Meter.

Another solution is to ditch the light meter and use the Sunny 16 Rule. Your starting point on a sunny day is to set your aperture to f16 and your shutter speed to the reciprocal of the speed of your film. So, if you’re shooting on ISO 200 film, your shutter speed will be 1/200 of a second. If it’s not sunny, you then adjust one of your settings to compensate for lower light levels.

Many of the best film cameras were designed to be used with mercury batteries: these cannot be bought today.

With many of the best film cameras, the battery only powers the meter, so providing you can calculate the exposure manually, this isn’t a problem. However, if you want the meter to work, you’ll need to find an alternative power supply.

Often a modern LR44 battery will work, but the power will fluctuate with age, affecting the accuracy of the metering. Fortunately, there are some other solutions out there: Daniel Schneider has written about the problem, while the Photoethnograpy website’s article gives alternatives for each different model of battery.

Time to Try out Film for Yourself

Are you excited about the possibility of shooting on 35mm film?

The film makes you consider your images far more carefully: you only have a limited number of shots on a roll of film–so you’d better get it right! An understanding of manual exposure is helpful, so brush up on your knowledge. All these skills will feedback on your digital photography and make you a better photographer.

If you do take the plunge, please leave a comment below and let us know which camera you bought. Happy shooting!